Horace Horsecollar was presented in his earliest incarnation as Mickey Mouse's four-legged plow horse. He could walk upright on his hind legs, place gloves on his forelegs to become hands, then, when Mickey needs a horse again, revert to his original form. Horace mostly played bit-part characters in the approximately thirty cartoon shorts in which he appeared, and his character was never as fully developed as the "Fab Five."

Like Goofy in his early "Dippy" appearances, Horace's body seemed to be formed of rubber tubing. In film he has been most recently seen in "The Prince and the Pauper" where he had a bigger role as Mickey's pompous tutor. Horace plays a much bigger role in his comic books where he often accompanies Mickey on his many sleuthing adventures or as Clarabelle Cow's paramour and fiance. Clarabelle and Horace have been engaged since 1931, but they both seem too shy to follow through (apparently neither thinks they are worthy of the other). For a brief time, during the late 1960s, Clarabelle began dating Goofy, perhaps in an attempt to give Goofy a girlfriend. During this time Horace's whereabouts are unknown. Toward the end of this time Clarabelle's status with Goofy was challenged by another dogface named Glory-Bee and Clarabelle seems to have returned to her former paramour, Horace. 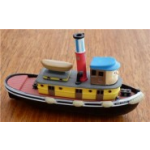